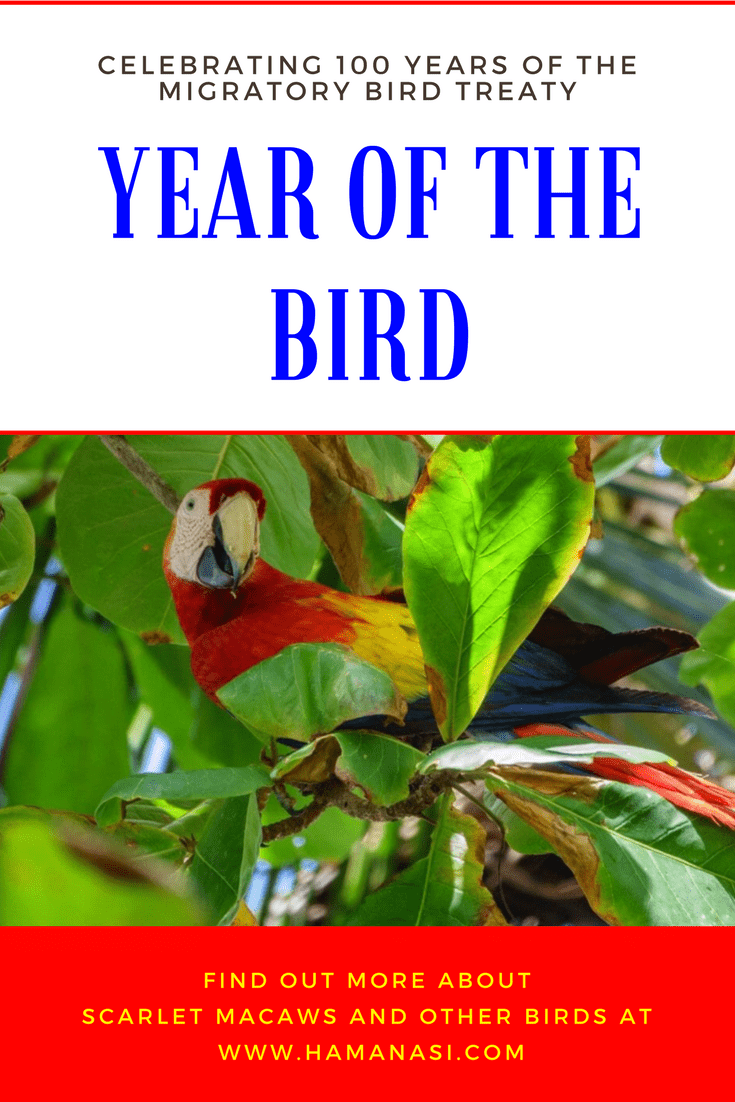 Nice to Meet You: The majesty of the Scarlet Macaw (Ara macao) lies in its stunning large and bright scarlet feathers adorning its body with progressive yellow and blue plumage on its wings. Measuring approximately 32 inches in length, from beak to tail, makes them the largest parrots in the world. Young Scarlet Macaws are distinguished from mature ones by having grey-brown eyes instead of yellow ones, in addition to also having shorter tails. The Scarlet Macaw’s large adapted beaks are perfect for cracking hard nuts and seeds across the rainforests of Central & South America to southern Mexico. They move around within these areas in search of seasonal fruits for them to feed on.  A bit fussy, the only nest in the cavities of trees like ceiba, quamwood, pine, and others. Their rare status and flamboyant plumage makes spotting them in Belize a real treat!

Why is that? Not because of the Chinese calendar – they’re on the Year of the Dog, but there’s room for more than one animal this year.  2018 marks the centennial of the Migratory Bird Treaty Act, perhaps the most powerful and important legislation ever passed to protect birds. To celebrate the landmark treaty, Hamanasi is joining National Geographic, Audubon, BirdLife International and the Cornell Lab of Ornithology on a “Year of the Bird” Campaign. Nature lovers around the world are invited to commit to protecting birds today and for the next hundred years.

Every month in 2018 Hamanasi will bring you a post introducing you to one of the many migratory birds you can see in Belize, with information from our expert birding guides and pictures taken by our guests.

We hope you’ll join us in celebrating the Year of the Bird, either by visiting Hamanasi or by sending us your pictures of migratory birds. We’d love to feature your work in next month’s post! #BirdYourWorld

A Word from a Wise Man: In our search for knowledge about these aves we had a chat with Lorenzo Coc, one of Hamanasi’s expert birding guides. Here is the insight he shared with us:

It Takes a Force to Raise a Bird:  Within Belize our subspecies of Scarlet Macaw (Ara macao cyanoptera) has its home base deep within the jungles of the Chiquibul Forest Reserve in Western Belize (further bordered by the Chiquibul National Park). This makes sightseeing extremely difficult- perhaps impossible, unless you are a member of the Belize Defense Force which manage the reserve and closely monitor and protect these birds from poachers.

Now You See Me, Now You Don’t:  Fortunately, the birds don’t always stay at home! The best time of the year to see these magnificent creatures is from January through March in the hills outside the Mayan village of Red Bank in Southern Belize, where they migrate for a feeding vacation, attracted by the seasonal fruits of the “annatto” and “pole wood” tree. Hamanasi appreciates this time of the year and schedules our Tropical Birding Adventure to Red Bank village for our guests to enjoy the Scarlet Macaws. It’s a sight to behold — bright red, yellow and blue colours splattered against a green jungle canvas!

Marriage Is a Serious Commitment:  Scarlet Macaws mate for life – it just so happens they are our featured feathers for February, the month of love!   They can often be found soaring high above the canopy in pairs and communicate through raucous shrieking honks. When feeding, however, they can be spotted with a flock of 30 to 50 other Scarlet Macaws – that’s a lot of double dates. They have a life span of 40 to 70 years. A paired female would lay 2 to 4 eggs per year, with only 2 usually surviving. The young chicks fledge at roughly three months.

FYI: They can be very aggressive when breeding — stay clear!

Threatened population: The Scarlet Macaw’s beautiful plumage makes them a hot commodity for the black market. Although their range is extensive, habitat destruction and capturing for the pet trade has made colonies fragmented. The species is near threatened. In Belize, we are proud of the work that the Belize Bird Conservancy is doing with these birds. Check out this article about how they are protecting Scarlet Macaws in Belize.

We Go Way Back:  Ancient Mayas revered the Scarlet Macaw for the same reason we do, those boastful, bright feathers! Mayan kings made royal cloaks, tunics and headdresses from these feathers, which they wore in their holy temples while meditating and talking to the gods, as depicted in ancient pottery. It is said the gods found the colorful headdress appealing. Hey, we all dress proper to go to church, don’t we?  Now days, it is illegal to have

This Month’s Thanks: Special thanks to Hamanasi guest Andrew Morrissette and guide Lorenzo Coc for their photos of Scarlet Macaws during this year’s migration, taken in the hills outside the village of Red Bank.

Coming next month our featured feather friend will be the Hooded Warbler. We will indulge on the knowledge that they are more than just small and cute.  If you have any photos of them, please send them our way and maybe we’ll feature them in our post!

Something Extra — Become a Bird Song Hero. If there’s a bird song that has been bugging you, you’re not alone. Help with bird songs is the number one subject people search for on our website. Fortunately, The CornellLab’s Bird Academy has put together a new approach called Bird Song Hero that combines spectrograms, videos, and a game format to help you visualize songs as you learn them. And it’s free!

Seleem became Hamanasi’s Sustainability Manager in March 2016. A conservationist in heart and spirit, he has worked in conservation in Belize for more than 15 years. He is a graduate of the University of Belize, and a member of the MesoAmerican Reef Leadership Program. Seleem lives in the beautiful village of Hopkins and works to create partnerships for a healthier, cleaner environment for all.